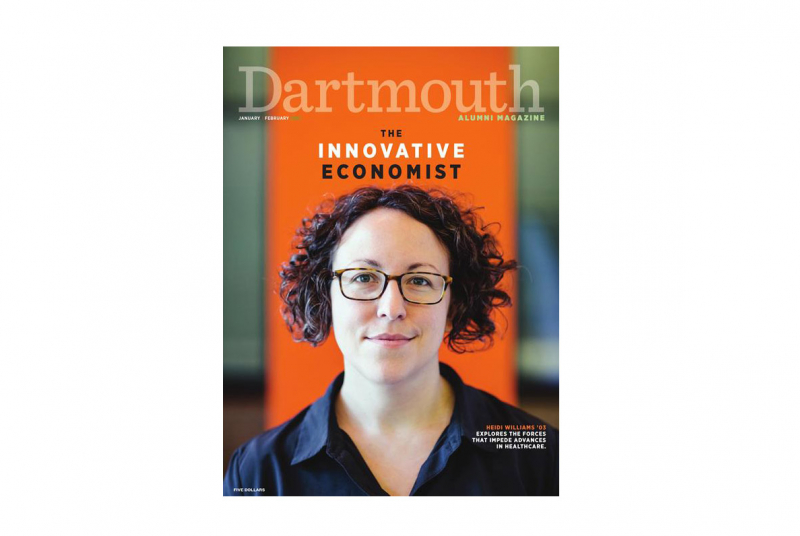 Clinical Critique
Regarding Heidi Williams ’03, her brilliance and accomplishments are impressive [“The Innovative Economist,” January/February]. She researched why so many drugs are approved to treat late stages of cancer when relatively few are approved to treat more survivable early stages of the disease or to prevent it altogether.

However, there is a rationale for the first clinical trials on cancer drugs to involve late-stage patients who have failed all standard therapies. With an endpoint of survival, these trials provide definitive answers sooner than studies done on patients who are earlier in their course. If an unexpected, serious adverse effect appears, these patients have a short life expectancy. Obtaining informed consent is easier in patients for whom nothing else is available.

Should a positive signal emerge, the new drug will be incorporated into trials of earlier patients, which consume more time and require larger sample size to reach significant conclusions. Many valuable drugs have progressed through this pathway.

Regarding prevention, an ounce is worth many pounds of cure in cancer. Approaches such as smoking cessation and preventing youth initiation of tobacco are useful. I appreciate Williams’ great scholarship, energy, and relationships with her colleagues, both her mentors and mentees. But there are legitimate reasons for her findings mentioned in the DAM article.

Faulty Assumption
In his letter in the January/February issue of DAM, Doug Coonrad ’67 questioned the suggestion by Frank B. Wilderson III ’78 [“Continuing Ed,” November/December] that his football career at Dartmouth was impacted by racism. Coonrad posits that Wilderson’s allegation is suspect because Reggie Williams ’76, who is also Black and played during Wilderson’s era, was team captain and was later inducted into the College Football Hall of Fame.

Coonrad’s suggestion that Williams’ athletic success proves Wilderson was not discriminated against is not persuasive. Reggie was my roommate and fraternity brother at Dartmouth. He often spoke of the very discrimination against Black players that Wilderson highlighted.

I hope the athletic discrimination that Wilderson mentioned is a thing of the past. However, such historical injustices will continue to sow discord if they are not honestly addressed.

Perusing the November/December 2020 issue of DAM, I stopped to read about a new book by Williams, Resilient by Nature: Reflections from a Life of Winning On and Off the Football Field. Wow, sounds like yet another book all about winning. That is what we are all taught is obviously the ultimate goal in life. Yet only six pages later, I get a very different perspective of life from an interview with Wilderson. Both Williams and Wilderson are published authors and seemed to have lived very full and creative lives. So, if we are to believe Wilderson, though they clearly had totally different experiences on the Dartmouth football field and perhaps off the field, both appear to project a certain happiness with who they are in 2020.

If we choose to accept the perennial wisdom of the Dalai Lama—“The very purpose of our life is for happiness”—though they had wildly diverse experiences at Dartmouth, both share a common happiness. That is a type of diversity we can all appreciate and applaud.

In the same issue of DAM is an article on Mister Rogers’ 2002 Commencement address, written by former College President James Wright [“Good Neighbor”]. What a beautiful counterbalance to the de rigueur message about success driving most commencement addresses. It is an homage to alum Fred Rogers ’50, who epitomized and modeled a rare character trait in our culture: humility.

I am encouraged by the views of Tiffany Harper ’05 on implicit bias [“Your Brain Is Wrong,” November/December] and am hopeful that the road to easier conversations on race has widened. I particularly enjoyed her synopsis of retraining the brain, or more explicitly, broadening one’s experiences, whether with different races or cultures.

I was originally raised under legal segregation and experienced both the joys and pains of desegregation starting in middle school. My years at Dartmouth, followed by seven years living abroad, allowed for broader-based cultural experiences beyond Black and white.

In 2020 America became the epicenter of racial unrest, protest marches, and heightened tension. We can and should use this environment for self-reflection and to open dialogue regarding the implicit and cultural biases that lead to these outcomes. These biases impact all of us, and it will take all of our efforts, working together, to overcome.

According to Heather MacDonald’s The Diversity Delusion: How Race and Gender Pandering Corrupt the University and Undermine Our Culture (2018), implicit bias, as regards race, is, at best, a hypothesis, not an evidence-based, scientifically validated, widely published, and peer-reviewed fact. The response-time methodology used in the Implicit Association Test is at the heart of the argument. It is fraught with controversy from other psychologists and sociologists. It does not pass the gold standard tests of reliability or validity. Its authors seem reluctant to answer criticisms. The statistical methods employed are also under contention.

In spite of all this, the implicit bias movement has spawned a multimillion-dollar consultant industry in schools, business, entertainment, and government. So, whose brain is wrong?

I was dismayed to read about how well Dartmouth is doing with its petting zoo for stressed undergrads [“Animal House?,” January/February] but how poorly it performed in the college free-speech rankings: 52nd out of 55 and last among the Ivies [“Failing Grade” January/February].

For a college that hosted George Wallace and Malcolm X in the 1960s, the latter is a true embarrassment. The former is, as well, but then not everyone can assimilate “the granite of New Hampshire.”