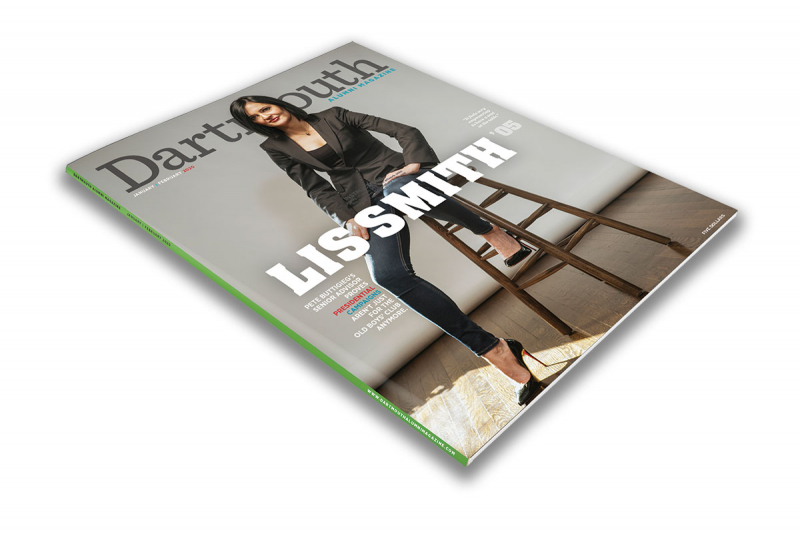 Those Stilettos
In the halcyon days of the late 1960s my fraternity brothers and I used to read the letters to the alumni magazine and howl at the hysterical rants from the unreconstructed alumni of old. Today I read the letters about your article on Lis Smith ’05 [January/February], and I was struck by the fact that the majority of fiery, disapproving rants were from people—yikes!—my age or younger. (Stilettos? Stilettos are objectionable? Dear God.)

I asked myself, “How did this happen? Where have you been, Gerry? How did the cranky, pissed-off guys skip over you to a new generation?” But as I thought about that, I realized it wasn’t about me or the acerbic, curmudgeonly guys of whatever age. It’s about Dartmouth Alumni Magazine. If you still can, as you did in days gone by, stir a bunch of crabby old shut-ins to hysteria over a fairly innocuous feature of a young alum making her mark—well, then you’re doing a good job of putting all of Dartmouth out there for us to see. And you have the spine to publish the screaming disapproval. Well done. Keep up the good work.

Why Conform?
Dartmouth leadership recently shared that perhaps only some students will be on campus this fall because of social distancing mandates [“What’s Next?,” May/June]. For me, Dartmouth was special primarily because of friendly, enthusiastic people and the beautiful environment. Online education deletes that, ignores critical elements of physical and mental health, and may harm students, just as Ford’s assembly line harmed workers: stupefying bodies and throttling spirits. And to what end? The 10-to-39 age bracket has a mere 0.02-percent chance of dying from Covid-19. On campus students will be largely isolated from the most vulnerable: the elderly with underlying health conditions.

Dartmouth members particularly vulnerable to Covid-19 should have the right to self-isolate or teach and study online. But at least 80 percent of those with the virus experience only mild symptoms. Why not let students develop natural immunity by contracting the virus?

Why conform to non-holistic government policies that recognize distance from a germ as the sole yardstick of health? Why endorse a divisive policy that protects those who might die from the virus significantly more than those who might suffer or die from depression, anxiety, inactivity, isolation, and job loss? Shouldn’t we try to protect equally each Dartmouth member’s life from its greatest threat, whether a virus or suicide?

My Three Sons
As a proud father of three sons who are Dartmouth alumni, I would like to supplement the interesting and delightful article “Sibling Revelry” [March/April].

Brian Stretch ’86, who was featured in the sports section of the September 1985 magazine, became an assistant federal prosecutor and was subsequently appointed U.S. attorney for the northern district of California.

Timothy Stretch ’88 became an Air Force fighter pilot and flew combat missions in Iraq, Bosnia, and Afghanistan. He later was promoted to the general staff of all air operations in Europe and Africa.