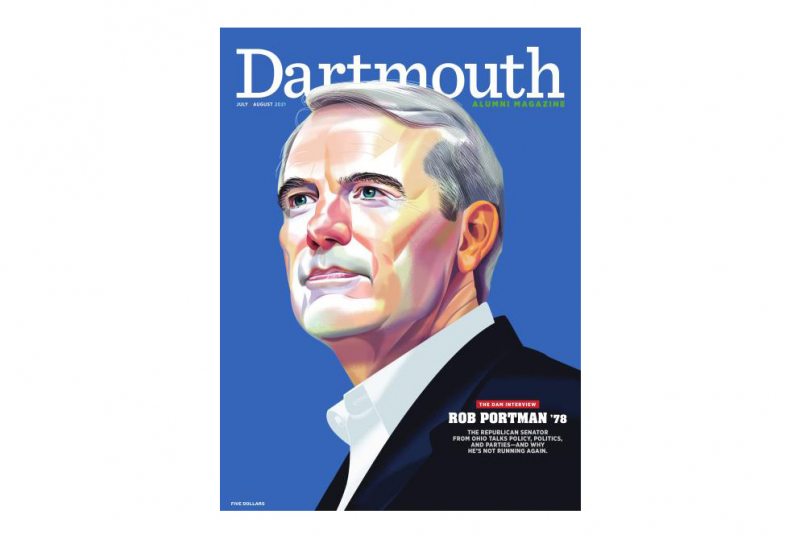 The Senator
Rob Portman ’78 [“Homeward Bound,” July/August] lets himself off the hook too easily. While I don’t doubt that his heart is in the right place, he did not vote to convict Donald Trump, who was impeached for attempting to illegally and violently overthrow our government in a way that will stain national elections going forward for decades. The only reason the second impeachment was “partisan” is that almost all Republicans in the U.S. Senate missed a historic opportunity to condemn and marginalize Trump’s attempt. Portman calls the second impeachment a “dangerous precedent.” On the contrary, it would have been a historically important benchmark.

Imagine where we would be now if Trump had been convicted by a bipartisan supermajority, thus establishing a brave and renewed political center. Instead, Portman implicitly sided with the Proud Boys. I used to be a bipartisan voter. Rob did a cool kayak trip on the Rio Grande and a brave and interesting senior thesis. I was proud to see him in government. No more.

Trump-enabler Rob Portman gets a heroic cover portrait and a softball interview? Shameful and embarrassing.

It’s interesting that the interview Jake Tapper ’91 conducted with Sen. Portman includes no mention of Portman’s endorsement and support of Donald Trump for a second term. Portman claims to be bipartisan, but he was one of the most consistent supporters of Trump-backed legislation. He supported Mitch McConnell’s arrogant refusal to consider Judge Merrick Garland for the U.S. Supreme Court during President Obama’s last year in office. And, as we know, he did not consider Trump’s antics relating to Ukraine and the mob insurrection on January 6 to be worthy of impeachment.

While Portman is to be commended for his support of same-sex marriage, unfortunately, he failed his biggest test. Donald Trump is the gravest threat to American democracy in decades, and Portman is smart enough to understand this. But when it was time to speak out, as a few of his Republican colleagues did, he lacked the courage to do so. I fear history will not look kindly on his cowardice.

Shame on Rob Portman. He is a man who has left our country worse than he found it. Portman, along with fellow Republicans, has comforted the comfortable and afflicted the afflicted for decades. Portman’s son, not he, was the brave one to stand up for gay rights. The senator followed. Portman is a coward for voting to convict President Clinton in his impeachment trial but went 0-for-2 on mob boss Trump. Nothing here for Dartmouth alums to be proud of.

How fitting that Nigel Buchanan’s illustration of Portman on the cover of Dartmouth Alumni Magazine portrayed him with his mouth closed. It basically reflects his response to four years of the Trump fiasco except when he miraculously located his voice to vote “No” during two impeachment trials.

I’m sure Sen. Portman has been a good and conscientious public servant. For the most part he appears to have shown the courage of his convictions, and I applaud him for that. But in the single most important challenge of his political career he has—up to this point at least—let our nation down. He has, when it really counted, failed to stand up to Donald Trump. In particular, he voted against conviction in Trump’s second impeachment trial for inspiring the January 6 insurrection at the U.S. Capitol. As any number of officials and commentators have said of January 6, “If that’s not an impeachable offense, what is?” Portman’s party-line argument that Trump was out of office by the time of the vote makes no sense. It would mean all future presidents could act with impunity in their final weeks on the job.

To Sen. Portman, I say, it’s not too late. You’re still in office. Because you and most of your fellow Republicans in the Senate let Trump off the hook, his attempts to discredit the results of the 2020 presidential election and undermine our democracy have not ended. Stand up to him. Stand up for the democracy we’ve managed to hold onto all these years. Please.

“Dismay” is the kindest word I can use as an Ohioan to describe my reaction to seeing Portman’s face on the cover of DAM. He was just another disappointing congressman from this state. On several very controversial votes where it was clear that it would be close, Portman stood on the fence pretending to waver back and forth until, when the chips were down and it was clear that his vote would not be consequential, he announced that he had planned to vote on the more moderate (i.e., the losing) side. Portman could frequently be found on the sidelines seeming to ponder the correct way to vote, but he wasn’t so much indecisive as reluctant to admit his preference until he had no choice.

The interview made it sound as though he was very much in favor of gay rights—after his son came out. It neglected to say that prior to that time he was quite opposed to gay rights.

Portman’s rationale for not voting to impeach Trump was that Trump was already out of office. While it is correct that Trump was gone, in fairness it should be remembered that he was gone because Portman’s leader, Mitch McConnell, had done everything in his power to delay the trial and even prevented witnesses from testifying. Tapper either didn’t ask or certainly didn’t tell, if he did ask, how Portman would have voted in a trial that wasn’t delayed and which had allowed testimony. Make a guess.

To say I was pleased to hear of Portman’s decision to end his career would be an understatement. The interview was a series of softballs lobbed at him, and he should have knocked them out of the park—but didn’t. Tapper was so kind to Portman that it would have only been right for Portman to have picked up the check for dinner.

A Ruined Row?
“A Hall for All” [July/August] called attention to yet another disingenuous bit of communication by the administration, which has maintained all along that the exteriors of the iconic buildings on Dartmouth Row would not be touched by the renovation now under way. But the plans show otherwise: A broad, elevated plaza across the front of Dartmouth Hall will cover much of the original foundation and steps, and what is best described as “farmhouse porches” will be added to Dartmouth and Thornton halls.

This mess actually goes beyond defacement all the way to desecration. Perhaps the administration felt the need for an elevated plaza and other embellishments to satisfy Americans with Disabilities Act requirements. However, those requirements have long been met by ramped entrances that provided easy access from the east side of the building, leaving the front intact.

Overall, the contemplated exterior changes are brutal. They will destroy the simplicity, symmetry, and beauty of the entire row, the integrity of which former art professor Hugh Morrison ’26, an authority on American architecture, called “perhaps the finest group of early college buildings in the country outside of Charlottesville, Virginia.” I urge all alumni to exert whatever influence they can to persuade the College to take a more rational, historically appropriate, and aesthetically informed approach.

Give and Take
Let me see. According to DAM per the Global Golf Post [“A ‘Painful’ Process,” May/June], the College turned down a $22-million offer from alumni to fund the golf program, yet the College still manages to pummel an alumnus who has been living on less than $20,000 annually for the last 30 years for donations. Hmmm?

A Crash Foretold
I recently listened to a rebroadcast of a 2017 radio interview with Daniel Kahneman, a psychologist and expert in behavioral economics who was awarded the Nobel Prize in economics in 2002. Kahneman said that what the 2008 economic crisis did, in the eyes of the public and many economists, was introduce “the hubris of the economics profession….It was a failure to predict.” A failure to predict: Kahneman used that phrase twice to make his point about the limitations of economics.

It reminded me of an article in DAM written by John H. Vogel Jr., an adjunct professor at Tuck [“Shiny Bubble,” May/June 2005]. Vogel’s prediction is clearly stated in the article’s subtitle: “As housing prices skyrocket and real estate speculators jump in, there is good reason to anticipate a crash.”

I am clueless as to why in the world I saved this article. But every once in a while, as I go through hundreds of articles from my Dartmouth file, I look at “Shiny Bubble” and think DAM published an article that was prescient. That’s an understatement. When the proverbial s--- hit the fan in 2008, I wonder whether anyone remembered or acknowledged the DAM article from three years earlier. For any and all DAM readers, it was a very clear and prescient warning voiced by Vogel, a vox clamantis in deserto.

I’m going to cancel my subscription to The Wall Street Journal, Fortune, and Inc. and look to DAM for my economic forecasting!

Shortcoming
In your article about Walter Bernstein [“Under Fire,” July/August] he is described as “short and intense.” At my second interview for a pediatrics residency at Harvard a fellow asked me if I wanted to know what they said about me at the first interview: “She is petite and thinks sharply and clearly.” Those two facts are as closely correlated as “short and intense.”

It’s a shame that we continue to link physical diminutives to contrast them with positive character qualities.