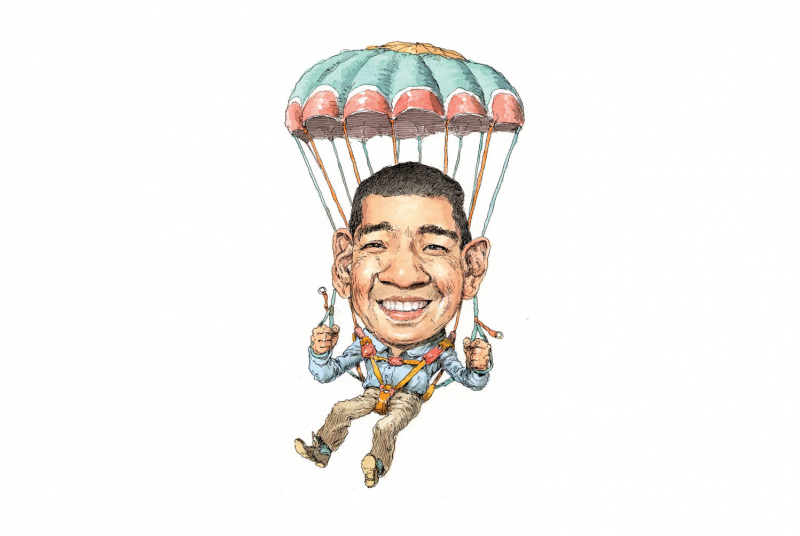 Notable: At Human Rights First, a New York City- and Washington, D.C.-based nongovernmental organization (NGO), develops apps that can be used on the ground by those protesting oppression; has researched how technology can be used to identify and address disinformation campaigns; served in Iraq as an Army officer and with the U.S. Defense Intelligence Agency

“When I first came to Dartmouth I met Mike Breen ’02, who encouraged me to join ROTC by telling me how much fun it is to jump out of an airplane. In 2007, when I was doing just that, I wondered, ‘Why did he think I’d enjoy this?’ Nonetheless, when he became CEO of Human Rights First [HRF] and recruited me, I decided to take a metaphorical leap.”

“I’m in a nontraditional role for a human rights organization. It’s a hybrid of what a chief product officer would do at a startup, responsible for the application of technology being developed in-house, while also serving as a chief information security officer.”

“A couple of things have transferred across the weird, interesting jobs I’ve held. One is being able to game out potential scenarios; the other is resilience to events, which has come into play between the Covid-19 pandemic and the Black Lives Matter protests.”

“We’ve all seen the United States pull back on commitments to human rights at home and abroad. We’ve all been witnesses to inhumane policies such as family separations at the border and to detainees in ICE facilities put at risk from the pandemic. HRF has enlisted the Harvard College Data Analytics Group to track Covid-19 in those facilities, and our lawyers have secured the release of five detained clients. We want to evolve to take unilateral action when necessary, especially when America doesn’t live up to its founding ideals.”

“While technology can enable massive human rights abuses, tools such as encryption can help defend activists and protesters. Technology companies can do more to ensure their programs and tools don’t fall into the wrong hands, but activists and movement leaders should educate themselves about the best ways to use technology both offensively and defensively.”

“Human rights abusers, from white supremacists to military officers committing genocide, leave behind physical and digital trails of evidence. Human rights organizations must master the collection of this evidence to bring these individuals to justice.”

“It’s the cross-pollination of ideas that’s really going to deliver on the promise of tech to improve lives. Often when I have conversations about human rights issues, my first reaction is to suggest we apply technology, and the people I’m talking with aren’t aware that such tools exist.”

“I wrote my dissertation on how people perceive accountability systems psychologically. I learned that technology is just going to make you more of who you already were. Someone who already felt accountable to public scrutiny would feel that even more intensely if being recorded, but body cameras haven’t stopped police officers from committing horrendous acts.”

“For us to help our partners on the ground, we need their trust. No human rights organization in the United States can be a credible messenger on human rights anywhere if America doesn’t get its own house in order.”