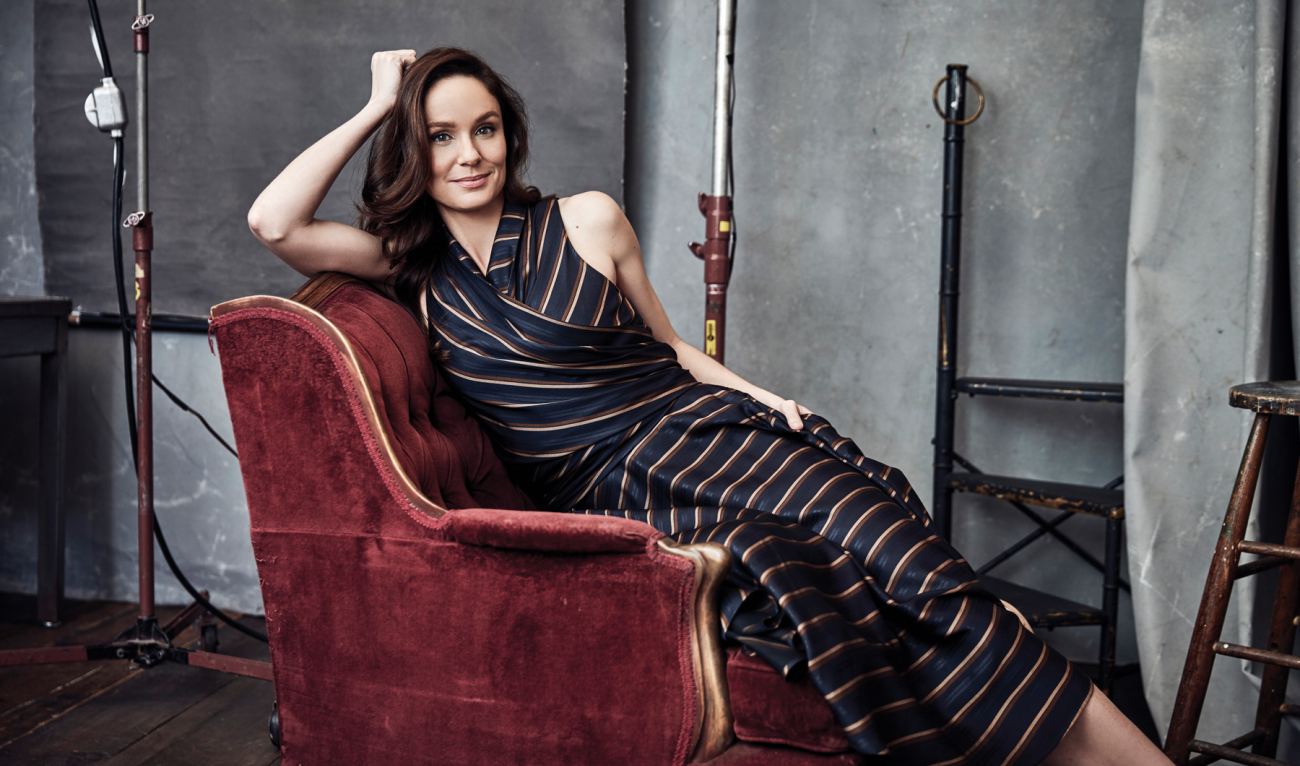 The star of movies and shows such as The Walking Dead and Prison Break, Sarah Wayne Callies knows the world of film. This summer she flexed her versatility with the debut of Aftershock, a scripted, 10-episode podcast she created, wrote, produced, and directed. She also stars in the apocalyptic story about a mysterious island that rises off the coast of California following a mega-earthquake—and the oddballs and other shaken survivors who find their way there. DAM recently dialed up Callies at her home in British Columbia to talk about producing a podcast during the pandemic with a little help from her friends, including a fellow Dartmouth alum.

How did this podcast come about?
Maybe two years ago a producer friend of mine, Ben Haber, brought an idea to me. The kernel of the idea was that a new island rises up out of the ocean. It immediately got my head running. Rather than trying to convince somebody to finance it for the screen, we decided to test the concept in the audio space. With a podcast it basically costs the same to generate an earthquake as a birthday party. Because we wanted to try and do something very big and a little new, we needed a certain amount of creative independence. When there’s a ton of money at stake, there are a lot of people who understandably have to get their fingers in there—and tell you how to do it. 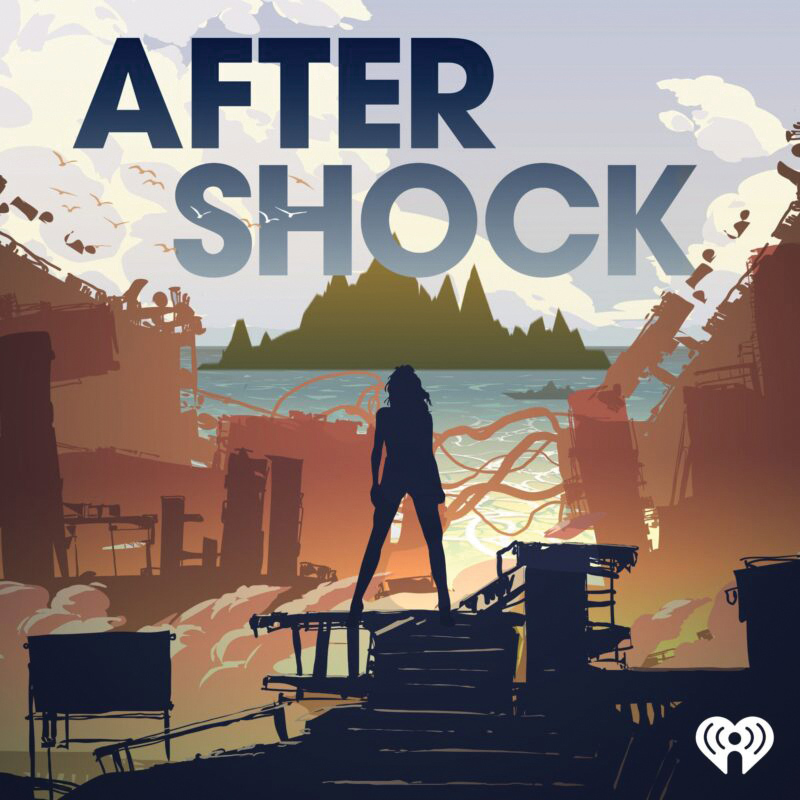 And you wanted to write the script?
Yes, and I’ve got a few other writing projects in the works. I love telling stories. It comes from spending the first 20 years of my career speaking someone else’s words and wanting to have a go at being the one to write those words.

How did it go?
I wrote the pilot on a plane to London from Vancouver. I find the process of putting your fingers on the keys, if you’ve done the homework, is pretty straightforward and fun. And the homework is similar to the homework of an actor: Who are these characters and what do they want? Character, character, character. Once those questions were answered, it flowed pretty naturally.

How did you finance the project?
We did it as though it were an independent film. We financed the pilot, then we took that as a proof of concept to an independent financier, who listened and said, “Okay. I’ll pay for the next nine episodes.” They let us take the story from there. When we had all 10 episodes, we shopped it around and iHeart Radio bought it.

What makes the story unique?
I’ve spent a lot of time in my career in the chaos and apocalypse and human-nature-on-the-brink space. We’ve done a pretty great job of writing female characters during the last dozen years, but they’re still articulating a male outlook. We tell these stories that seem to sort of make it sound inevitable that violence and domination are the way to get your way. So the first thing I did was take out all the guns. Whether it’s men or women holding those guns, I just lost interest because it’s an escalation of violence.

How did you get David Harbour ’97 involved?
I sent him a text and said, “Please.” He was super gracious about it. You’d be surprised by the generosity of actors, writers, and directors to get behind each other’s little passion projects.

You met Harbour in a directing class?
Yes. He already had this reputation on campus as a beast of an actor. There was no question in my mind that Dave would have a brilliant career. When I saw Stranger Things, I thought, “Well, Dave, what took you so long?” He has such a distinctive voice. I wrote his character, Wayne, with David’s voice in mind.

How did Covid-19 affect production?
When I wrote to all these brilliant actors I said, “Listen, it’ll be one day at a studio and you’ll never hear from me again.” Then the pandemic hit. We had recorded the first few episodes, but now we had to FedEx microphones and headphones to everyone, and we worked on SquadCast—software that allows you to record four or five people at the same time. Each of us had to create a sound booth wherever we were. At one point Dave was in rural England, and he had to put a quilt on the ground, surround himself with pillows, and put a duvet over his head. It became a much bigger pain than anyone could have known going into it. I felt terrible about that.

What do you think of the reaction to Aftershock?
The fact that people are listening makes me irrationally happy. What I hadn’t expected out of this entire experience was the abject terror I would feel the day we launched. With my previous roles, I’ve always been able to say, “Well, I didn’t write it. It’s not my show.” This one was squarely on my shoulders. Every time somebody reaches out on social media or a colleague takes the time to listen, it means the world to me.

You’re married to an alum. Correct?
Yes. My husband is Josh Winterhalt ’97. We met two weeks before he graduated. He became a teacher, and now he runs our household. He makes sure the kids are alive and fed and educated.

And you have two children?
I do. Sometimes it feels like there are six or seven of them, but as it turns out, there are only two. One is 8 and our oldest just turned 14.

What impact has Dartmouth had on you?
Well, I was a senior fellow, and I ended up with a major in drama and a minor in women’s studies. My classes were phenomenal. I had some extraordinary teachers. But Dartmouth was a confusing place for me. Coming from Hawaii, it was my first exposure to whiteness on the mainland. And I found it very disorienting and a little brutal. On the other hand, New Hampshire was a source of joy: spending time in the woods, the beauty. My first fall, I don’t think I closed my mouth. I was drunk on leaves. And I ended up with an incredible group of friends. It took me a little while to figure out that you don’t receive an education, you seek an education, and I found things such as a grant that allowed me to study Hawaiian mythology at home for a term and the jewelry shop at the Hop.

Will there be a sequel to Aftershock or perhaps a movie?
I’m hoping we get to do another season. I’m kicking around ideas in my head, but right now I’m more focused on the present and enjoying this first season.