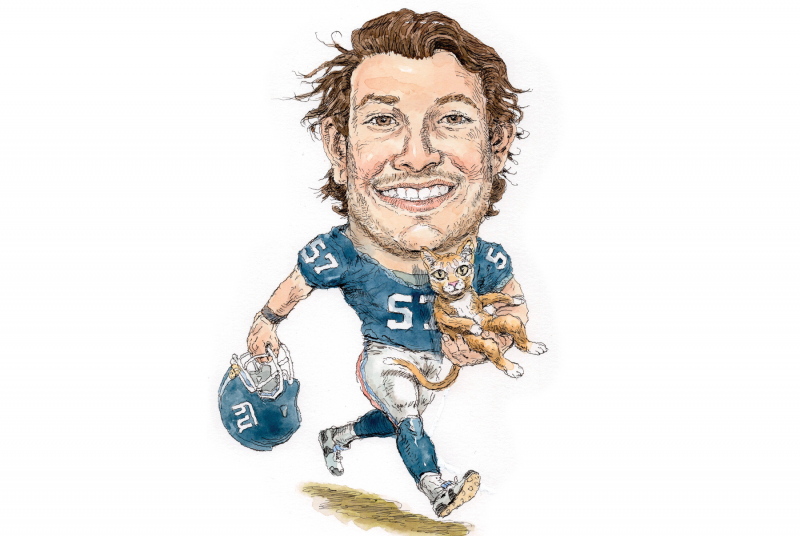 Notable: Signed as undrafted free agent with New York Giants in April 2020 after All-Ivy senior season that included a defensive touchdown against Princeton at Yankee Stadium and defensive MVP honors at the Hula Bowl; called up from practice squad in December, he made an interception and a fumble recovery in his first two games

Personal: Splits time between an apartment near Giants Stadium and his childhood home in Copley, Ohio

“I started playing football when I was 5 even though my mom was against it. I was big and wanted her to say I was 7 so I could play tackle. She let me play when I was 8 and made me wear a big cowboy collar brace because she thought I’d break my neck.”

“Growing up with a single mom can definitely make someone more mature, but I didn’t want to grow up and face the real world, so in some ways it made me less mature.”

“High school teammates who went to big universities told me, ‘Go where you’re wanted. If you’re good enough, the NFL will find you.’ Dartmouth made me feel wanted, and my mom was adamant about academics.”

“I learned a lot about myself at Dartmouth—nothing I want to share yet. It’s still early.”

“My favorite courses and professors were Econ 26 and Econ 46, with professors Meir Kohn and Bruce Sacerdote ’90.”

“I was kind of a hypochondriac growing up, so when I got meningitis sophomore year, I recognized the symptoms. After they admitted me to DHMC I texted coach [Duane] Brooks to say, ‘I think I have meningitis. I just had a spinal tap.’ Not long after, Coach T [Buddy Teevens ’79] rides his bike through the rain and is in my room, saying he thought I was joking. When I explained I couldn’t open my eyes because of light sensitivity, he went running around the hospital to find me dark sunglasses.”

“I didn’t tell my mom I was in the hospital because I didn’t want to worry her, but a friend stole my phone while I was asleep and called her. She was there the next morning. My friends told me I looked like a vegetable and they were afraid I was going to die. One morning I woke up and thought I had died. I kept saying to the doctors, ‘This is heaven, right?’ ”

“I got the same grief every NFL rookie does, but there’s the Ivy League grief too. Someone will have a question in the locker room and someone else will say, ‘Ask Niko. He knows everything.’ Once a coach quizzing us offered an ask-a-friend option. One of my teammates who didn’t know an answer said, ‘I’d rather ask Niko than Google.’ It’s kind of entertaining.”

“I’m habitual, but I’m not superstitious.”

“Someday I might bring back the long hair I had in college, but in the NFL it’s too much of a hassle since opposing players are allowed to pull on it.”

“I know there’s a lot of hype about dogs among people of my generation, and I love dogs, but the first pet I’m going to get is a cat.”

“Emotionally, as a player, there are so many things I can’t control. I had to teach myself to focus on the things I could control—to try to get better and work on my game and take care of myself.”

“When I had the interception in my first NFL game, it was an out-of-body experience. I was taking everything in, but I wasn’t controlling my body, I was acting instinctively. Same thing the next week with the fumble recovery.”

“When the Giants gave me No. 57 it did occur to me it was the same number as Reggie Williams. It was kind of a weird coincidence, which is funny because I don’t believe in coincidences.”

“The Giants FedExed me a contract and I signed it and FedExed it back. It wasn’t exactly a movie moment, but I was just glad it happened.”

“When LeBron James tweeted me good luck before my first game, it was just because we went to the same high school. I was really glad I didn’t find out about it until after the game. It would have been hard to focus.”