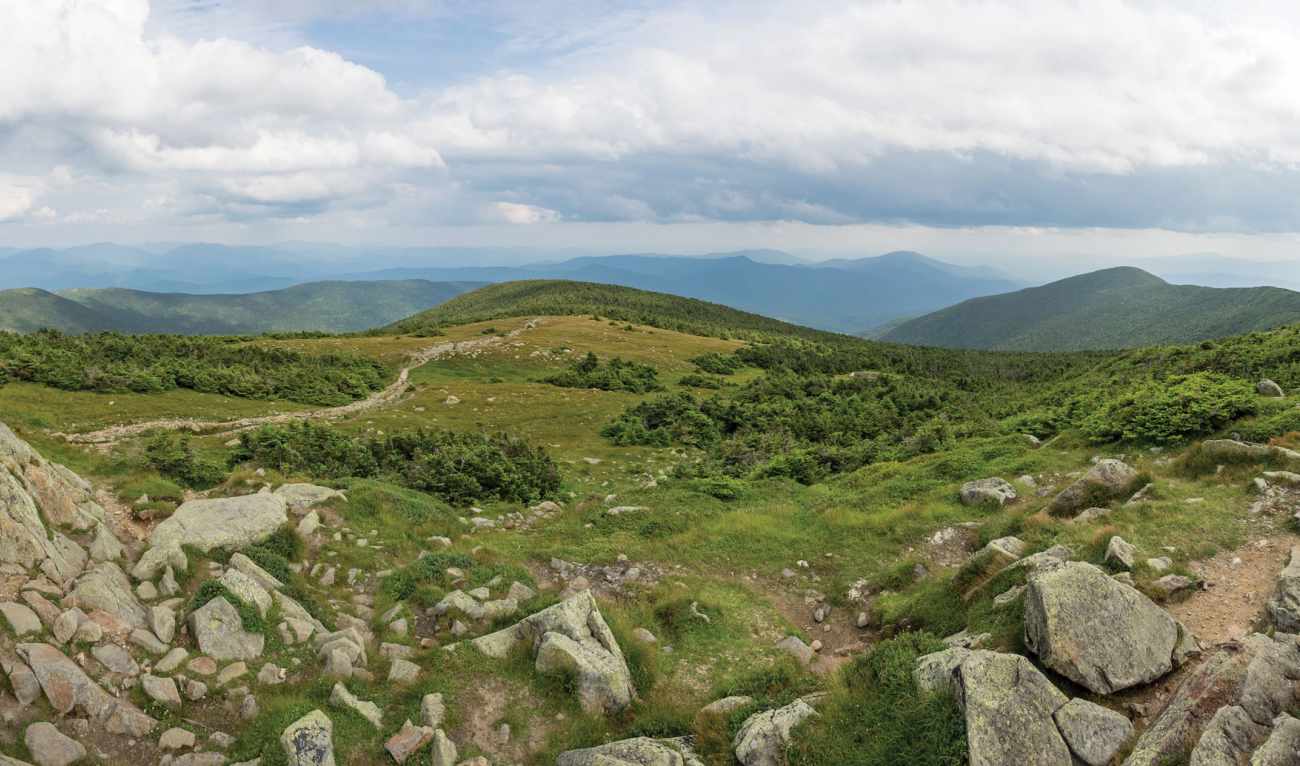 The Greenest Mountain in the Whites

The College’s love affair with its mountain started at the top. In the summer of 1920, E.K. Woodworth, class of 1897, and Charles Woodworth, class of 1907, purchased a hotel that had been on the summit since 1860—along with 50 acres of the rocky land encircling it—and donated it to the Dartmouth Outing Club. The DOC renamed the hotel Summit Camp, equipped it to sleep 50 people in bunks, and staffed it with students. Additional land purchases eventually brought the College’s total holdings to more than 4,000 acres on the 4,802-foot-high mountain, the largest privately owned tract in the White Mountain National Forest.

Summit Camp burned down in 1942. Moosilauke Ravine Lodge now stands at the base of the mountain. The DOC maintains the nearly 40 miles of trails on Moosilauke, as well as the 50-mile stretch of the Appalachian Trail between the summit and Hanover.

What’s In a Name?
Maps of the late 1700s called the mountain “Mooselock” and “Mooshelock.” New Hampshire’s Carrigain Map, published in 1816, named it “Moosehillock,” as if referring to a small hill where moose tread. In 1852 New Hampshire historian C.E. Potter wrote down “Moosilauke,” positing that the name derived from the Abenaki words “moosi” and “auke,” meaning “bald place.” In 1933, DOC-ers voted to recommend “that hereafter Moosilauke without any ‘ee’ on the end be the official pronunciation in council meetings.”

Peak Experience
Historians believe an Abenaki chief named Waternomee made the first ascent of the mountain in 1685.

Downhill
The DOC held the first modern alpine ski race in the United States on March 8, 1927, on the slopes of Moosilauke’s winding Carriage Road. The Moosilauke Down-Mountain Race became an annual event, and in 1933 it served as U.S. skiing’s first national downhill championship—won by Henry “Bem” Woods ’36. In the following years major ski races moved to Cannon Mountain, and in 1953 the College shut down all its winter ski operations on Moosilauke.

Skiers cross the finish line in a 1933 race.

Trips Destination
Built in 1938, Moosilauke Ravine Lodge was christened “Ravine Camp.” The 6,600-square-foot log cabin didn’t have much success as a ski resort, but it hosted freshman trips every fall beginning in 1939. The DOC formally renamed it a decade later. In 1963 the College offered to lease the lodge to the Appalachian Mountain Club for $1. The AMC declined because the lodge was in disrepair. In 2016 the College tore down and rebuilt the structure.

Crash and Burn
A U.S. Army B-18 Bolo bomber crashed on Mount Moosilauke’s eastern slope—near a sub-peak called Mount Waternomee—in January 1942, igniting flames and smoke that some mistook for a fire at the Summit Camp. Two men died. Five survived thanks to local volunteers who carried out the rescue in a blinding snowstorm.

An Enduring Ghost Story
The legend of Doc Benton originated in the 1800s. Summit Camp staff regaled visitors with the spooky story before it became a hallmark of freshman trips, passed down to a new class of undergraduates each year. The tale—about a doctor who haunts the mountain—can be told in 20 minutes or two hours, depending on the speaker’s flair for embellishment.

A Home for the Holidays
In the late 1950s the DOC began a short-lived tradition of hosting disadvantaged children for Thanksgiving at the lodge. “The essential turkey feast was supplemented with hikes, outdoor fun, and a fireside program of entertainment at night,” DAM reported in 1958. In the 1950s the lodge was also home to Wing-Ding, a party considered to be “the rip-roaringest New Year’s blast in the state.” The College outlawed the fete in 1963. 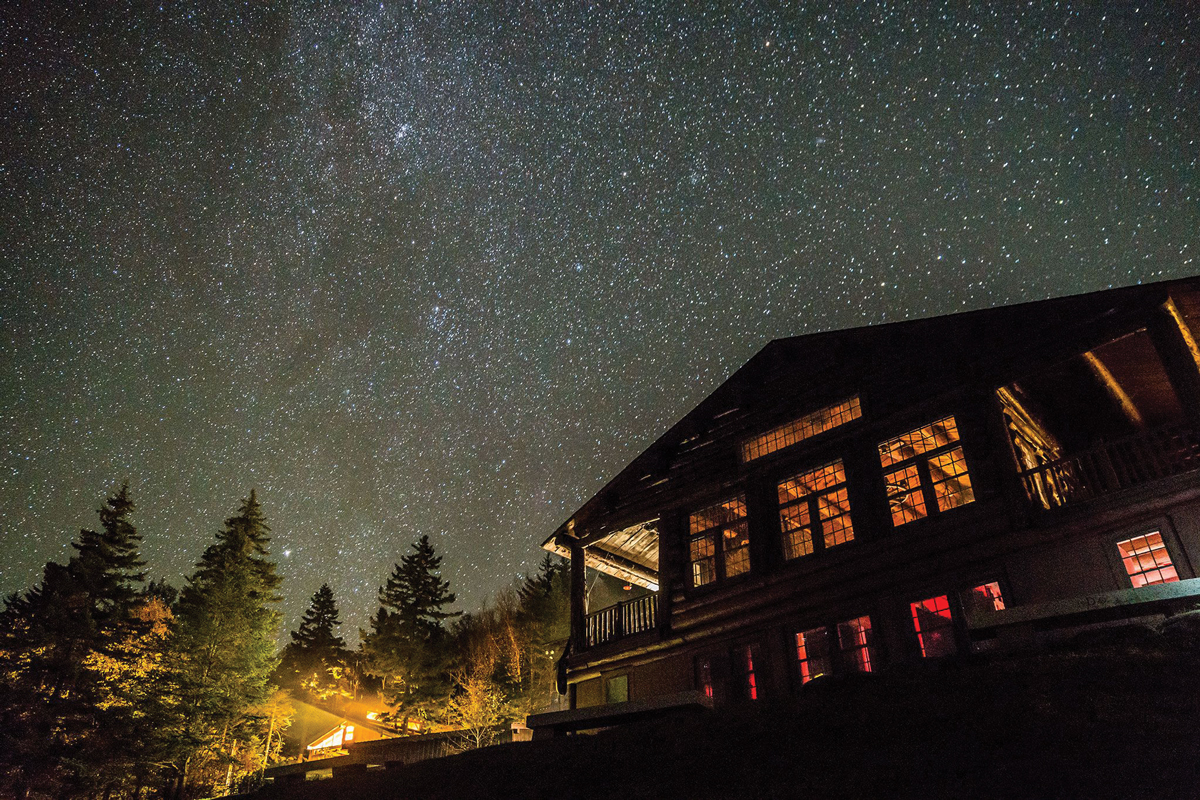 On a Clear Day
“From the summit of Moosilauke the peaks of all the New Hampshire mountain ranges may be viewed in their proper perspective,” wrote Robert Scott Monahan ’29 in a 1930 issue of DAM. “The skyline peaks of Marcy, Macintyre, and Whiteface in New York State are often evident on the clearer days.”

Close Calls
Four Dartmouth students needed to be rescued after a late-afternoon hike turned into an overnight near the summit in snowy conditions in February 1961. Two of the students suffered frostbite but recovered at Dick’s House. In May 2019 a College-led hiking trip on Moosilauke turned dangerous for Arun Anand ’19, who became lost for two days—and was found wandering shoeless in the snow—after separating from his group. An expensive search-and-rescue operation saved the day.