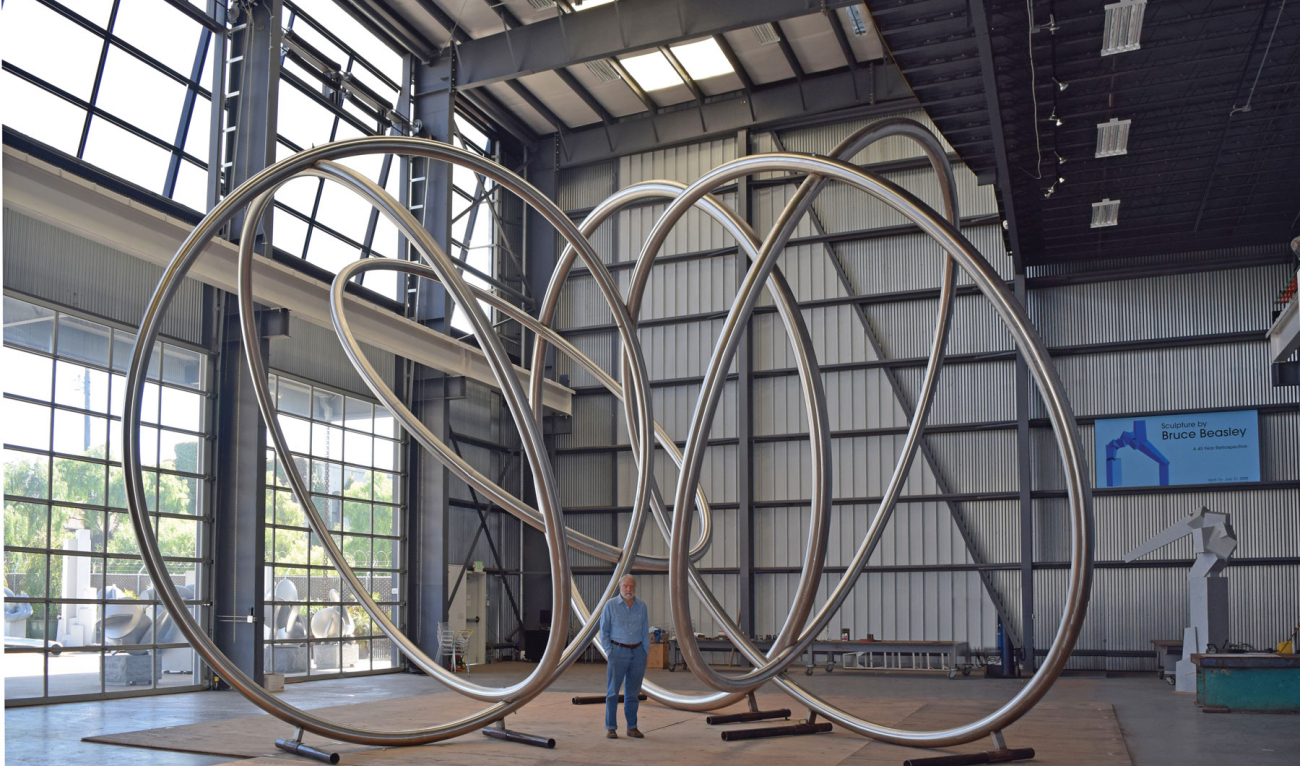 “Unity” dwarfs the artist In his studio. Made of six interlocking steel rings, the 2014 creation now stands in Fremont, California.
Features

I saw no place in the world for me,” Bruce Beasley says of his angst-filled early years. As a teenager he was torn between a bookish Los Angeles family and his “hot-rodder” impulse to tinker with cars. Then he signed up for an art class during his first year in Hanover. For the final exam, instead of turning in the required 30 drawings, he asked if he could complete the assignment in wood, putty, and other materials. He was sculpting, even if he didn’t realize it.

“It was the first time that the head, heart, and hand all came together, and it was an epiphany,” says Beasley, who sports a fedora as he gestures at some of his soaring stainless-steel works at Grounds for Sculpture, a New Jersey art park that’s hosting a 60-year, 62-piece retrospective on the sculptor through January 9.

“Throughout his career Bruce Beasley has pushed the boundaries of sculpture making,” says Faith McClellan, a director at the art park, “uncovering new techniques and methodologies that achieve the visceral and interactive experiences of abstract form.”

That first-year art class opened the door to his life’s work of coaxing fantastical shapes from metal, stone, and acrylic. Still, the College was a bit of a creative dead-end in the late 1950s. There was no fine-arts major, Beasley recalls, and although a custom major in sculpture would have been possible, he yearned for a more art-focused setting. So he transfered to the University of California at Berkeley, which had one of the country’s few sculpture programs. Success came even before his 1962 graduation: The Museum of Modern Art included Tree House, his rusted, cast-aluminum piece that recalls weathered auto parts, in its 1961 show, “The Art of Assemblage,” alongside works by de Kooning, Rauschenberg, Duchamp, Man Ray, and Picasso.

Ever since, Beasley has churned out a steady stream of sculptures inspired by nature and its underlying molecular structures. Curvaceous bronzes that wrap around themselves, for instance, evoke DNA strands. Bronze, he says, is “a friendly metal that takes color well and is a joy to work with.” He also created translucent, prismatic works using massive chunks of see-through acrylic plastic cast in a process he invented. “I wanted to make sculptures that were vessels of light.”

“I have the absolute, incredible privilege of making things that simply talk to me.”

Married and the father of two, Beasley at 82 still logs 9-to-5 days at his home and foundry in Oakland, California, fabricating every piece himself. He created 15 colorful new works during the pandemic. “There’s been no place else to go but into yourself,” he says. “I have the absolute, incredible privilege of making things that simply talk to me.”

C.J. Hughes wrote about Arthur Moffatt ’41 in the September/October issue of DAM.