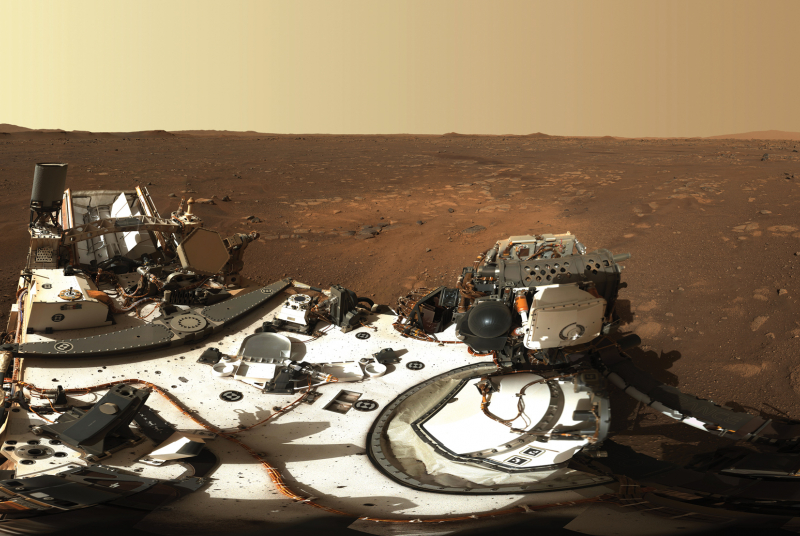 In case you haven’t heard, the red planet is a hot destination these days. More missions in the coming years will add to the excitement felt by many observers in February when NASA’s rover Perseverance survived its seven minutes of terror and safely landed on the Martian surface. Marisa Palucis, who is teaching a geomorphology course this spring that will stay abreast of Perseverance’s progress, has long had an interest in science fiction and that whole “strange new worlds thing,” she says. Here she explains why the exploration of Mars is of value to all of us.

It’s Early Earth
Early in Mars’ history it may have been much more Earth-like, with flowing rivers, lakes, maybe even an ocean. But instead of becoming a planet teeming with life like our own, it dried up and cooled off. It lost its magnetic field and much of its atmosphere—along with its protection from the sun’s harmful rays. Unlike

Earth, whose surface is continuously recycled, Mars’ is not. So the planet is in many ways a window into what early Earth might have looked like before life evolved. Mars may also hold clues to what it takes for life to evolve in the first place.

Humans need to Explore
Mars could be a vital part of our future. Elon Musk wants to send human settlers to Mars—both to explore the red planet in a way robots never could and to expand our presence in the solar system. Mars would not be a hospitable place for us, however, and without a spacesuit one would both boil and freeze to death at the same time. But humans are explorers and Mars has been an object of desire since Galileo first turned his telescope toward it in 1609.

Engineering Advances
We as a society have been attempting to land spacecraft on Mars for more than 50 years, including the recent successful landing of the Perseverance in Jezero crater. Most of these landers and rovers have been equipped with state-of-the-art instruments aimed at searching for signs of life, studying the current atmosphere, and even making fuel from the Martian atmosphere. These robots and their payloads need to survive a Mars landing, work millions of miles away from the scientists operating them, and perform well under extreme environmental conditions. The technology developed to send rovers to Mars and study its surface is now used to understand extreme environments on Earth, make in-situ field measurements, and design instruments to explore the outer reaches of our solar system.

Mars is a Unique Laboratory
As scientists we make observations, develop hypotheses, collect data or more observations to test our hypotheses, and through time gain knowledge about how our world works. But within the geosciences, we can test our hypotheses and models only within the bounds of earth conditions. We are constrained by things such as earth gravity and atmospheric pressures, such that those parameters are constants and not variables. However, Mars allows us to more thoroughly test our models. For example, can we use the same equations we use on Earth for processes on Mars?