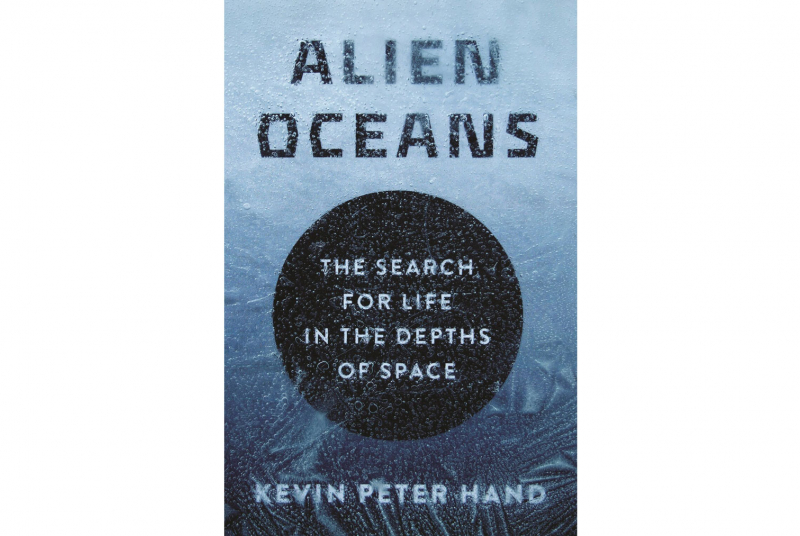 We were stuck on the bottom. Batteries were running low. Our air was running out. We had no way to communicate with the other submersible or with the team on the boat some 10,000 feet above us. We were nestled in a metal sphere, perched on some rocks at the bottom of the Atlantic Ocean.

This was my first trip to the ocean floor, and it had the makings to be my last.

The year was 2003 and I was in the midst of my Ph.D. studying the physics and chemistry of Europa, Jupiter’s ice-covered moon, when I got a phone call: James Cameron, filmmaker of Titanic and many other successful movies, was looking for a young scientist to talk about Europa while exploring the depths of our oceans.

And so, a month after that phone call, I found myself on the Russian research vessel Keldysh, floating above the middle of the Atlantic Ocean, preparing to explore the darkness below instead of the stars above.

Being in a submersible at the bottom of the ocean feels like a hot air balloon ride, scuba dive, and space mission rolled into one. The Russian Mir submersibles offer a small (approximately 8-inch) porthole from which to peer out into the depths: one porthole for each occupant, three in total. You can’t stand up, but there’s enough room for a cramped, hunched-over shuffle if one person needs to trade places with another.

As you descend, light begins to fade. Blue goes to black. The sub starts to cool. You can’t feel that you’re falling, but the sounds from the acoustic communication system serve as a metronome reminding you of the distance between you and the rest of the world.

After some initial exploration of the seafloor, we managed to track down a site rich with hydrothermal vents. For hours we cruised over the flanks of the Menez Gwen seamount (basically a volcano on the bottom of the ocean) and collected samples with the robotic arm from the gushing superheated vents.

But we overextended our stay. It had been a long dive and we had explored quite a large area of the seamount. Both Mir 1 and Mir 2 were at the bottom, and we had worked in tandem to sample and film much of the region. But now our sub (Mir 2) had lost track of Mir 1, and we were starting to run low on battery power.

In addition, our communications link was failing, and our low batteries meant that we could not send strong signals back to the Keldysh or to Mir 1. On top of everything else, the carbon dioxide scrubber was starting to fail, turning our little sphere into a ball of toxic gas.

So there we sat, on the bottom of the ocean. Viktor, the pilot, tried every trick in the book before resigning himself to relaxing in the sub. From his demeanor, either he had accepted the fate of a watery death for us all or he knew that some sort of search protocol would kick in and our job was to sit and wait.

My mind wandered as I looked out the porthole, staring at a red shrimp-like creature exploring the surface of a rock. My imagination drifted from our ocean to the possibility of oceans beyond Earth.

The scene through that porthole could be what “home” looks like to most of life in our universe. Recent explorations of our solar system have taught us that—while planets like Earth may be comparatively rare (one per solar system, if you’re lucky)—worlds with deep oceans, covered with ice and cut off from any sky or atmosphere above, could be ubiquitous.

In our solar system, these worlds are actually moons of the giant planets, with names like Europa, Ganymede, Callisto, Titan, Enceladus, and Triton. These are worlds that likely harbor oceans of liquid water today, right now.

Microbes and sea creatures that inhabit our ocean depths might do fine under the physical and chemical conditions thought to exist within the oceans of Europa, Enceladus, and Titan.

Although it seemed as though we were stranded on the ocean floor for a long time, it could not have been more than 45 minutes. It had grown humid inside the sub from the condensed water of our own biology. Each breath we took converted precious oxygen into water vapor and carbon dioxide. The curved orange walls of the sub were dripping. It was cold, damp, dark, and quiet.

Then, through the porthole a faint light appeared. The light grew, slowly meandering on a path that brought it closer and closer to us. Finally, the light revealed its source—our sister sub, the Mir 1. They had found us.

Knowing that Cameron and the Mir 1 team were running cameras that would be able to see us, we wrote a note on a piece of paper and pressed it against a porthole. The note said simply: “Must surface.” We watched the camera pan and tilt, inspecting us, assessing the situation. They had gotten the message.